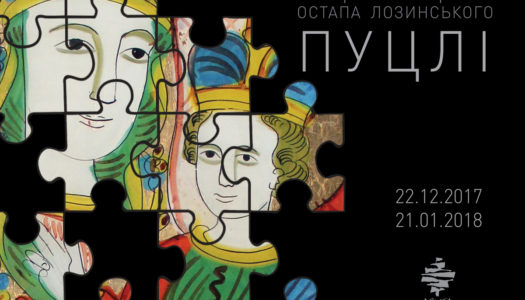 December 22, 2017, at 17:00 in the gallery DZYGA, will be the opening of the author’s project by Ostap Lozynsky “Putsli”.
The basis of the project was the traditional icons on glass, which originated from Hutsulshchyna, Pokuttya and Bukovina. The fragility of the material, the conditions of storage in often crude huts led to the destruction of the foundation, some destruction and destruction. The fragments of icons, sometimes with the lost image, could be found in attics or pantries. They never thrown away, often buried (buried) in places where people do not go. The project is designed to provoke the emotional contact of the present with the historical context, to analyze how fragile the ages can be established in the modern unified world. The question is how correctly we can collect these putsli, and in the absence of fragments, what will we complement them, or leave empty?

Iconography on glass is one of the brightest pages of Ukrainian folk art. This phenomenon, widely known in Central and Eastern Europe from the XVIII century, spread throughout the Ukrainian Carpathians from the middle of the nineteenth century and lasted only a few decades – until the beginning of the twentieth century. However, icon art on glass is perhaps the most striking achievement for all the culture lovers of Hutsulshchyna, Pokuttya and Bukovina. Such images, also called “red”, obviously, because of the predominance of bright red-colored paint on icons, were very common in rural cottages in the vicinity of Kolomiya, Bogorodchany, Kuta, Kosovo, Kosmach, Chernivtsi, Vyzhnyts. And, as a matter of fact, they practically did not live in churches. The list of saints and plots on the icons was limited to the most popular – St. Nicholas, Virgin Mary, Savior, St. Yuri St. Varvara, Crucifixion … With the proliferation of cheap printed reproductions, lithographs and photographs, these icons were pushed out of use, and the tradition of icon painting on glass was interrupted. The icons themselves from the beginning of the twentieth century have often become objects of interest of museum designers and collectors.